Pro Football's Big Game: It's The Most Flushable Time Of The Year

It’s been a season filled with compelling matchups, historical moments and stressful finishes. Now, there’s only two teams standing and the stage is set for professional football’s biggest game.

But the big game isn’t complete without your favorite food – and we eat a lot during it! On average, Americans will consume 2,400 calories over the course of the four hour event, with one in seven people attending a party to watch the game – so what exactly are we consuming?

All of that food adds up to the second largest eating day of the year in the United States, behind Thanksgiving. What goes in must eventually come out, however, but with so many Americans glued to the TV, bathroom breaks get scheduled around lulls in the action. The first opportunity comes at halftime, when the most flushes take place. Once the referee signals the end of the first half, it’s a mad dash to the bathroom – but don’t believe the legends about “the big flush.”

Coined to indicate the sudden influx of wastewater during halftime, “the big flush” is real but it’s legend has been blown completely out of proportion. There is a significant increase in wastewater during halftime, however it won’t cause a higher risk of pipes bursting and local sewer damage. The legend of a crippling massive flush began to snowball after a 1984 water main break in Salt Lake City during the big game, one that was credited to a synchronized flush. A direct link between the 16-inch pipe burst and locals’ excessive toilet activity was never actually proven. 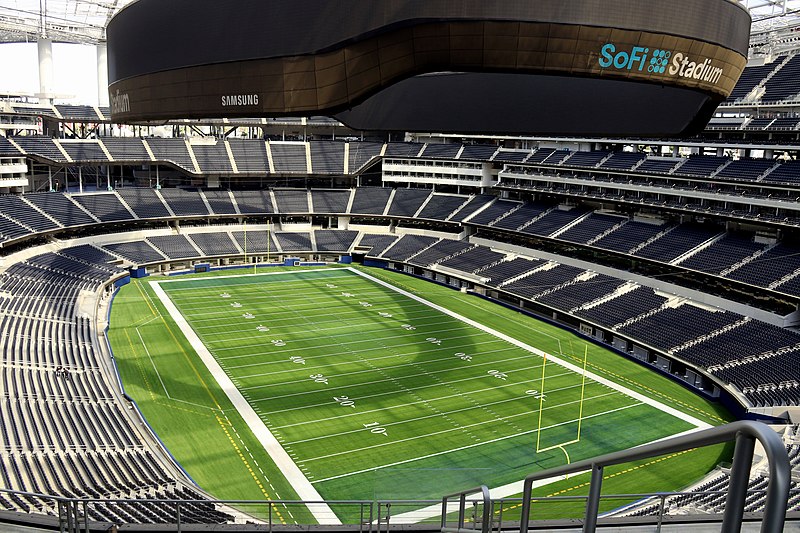 With an estimated 90 million people flushing the toilet between the second and third quarter, that’s hundreds of millions of gallons worth of wastewater. Cities across the country see a significant uptick from their wastewater treatment centers but what about inside the stadium?

This year’s game will take place at SoFi Stadium, a brand new, 70,000-seat venue that features everything from a state-of-the-art video screen to an artificial lake that captures up to 80 percent of the stadium’s rain runoff – a net reduction of almost 26 million gallons of water each year. As more and more of these football-centered facilities are built, the focus continues to be the water pressure and if a massive facility of this type has the ability to handle a ton of flushes at once. Stadiums prepare for heavy usage in advance, before opening, to make sure the structure can handle it.

Take Allegiant Stadium, Las Vegas’ new Death Star-looking facility and 2024 host of the big game, for instance. According to the Las Vegas Review-Journal, before Allegiant Stadium officially opened its doors in 2020, workers completed what is known as a “super flush,” activating each of the stadium’s 1,430 toilets at the same time. New stadiums have actually been requiring a 2-to-1 female-to-male ratio within the last several years, so there were definitely more flushes coming from the women's room. The workers performed the “super flush” for several minutes to simulate a game day experience and to make sure the stadium’s water pressure could handle the maximum usage. It's now become a standard practice for places like SoFi Stadium, so it's safe to say the structure will be fully prepared for the game on Feb. 13.

There’s a lot of eating when it comes to the big game – whether you’re watching at home or at the stadium – but there’s just as much flushing! A lot of work goes into making sure whatever toilet you're using can actually handle the additional use, so that you can just get back to the game. Don’t worry about flushing a little more, but always keep an eye out for potential issues.

If your toilet is fumbling during the big game and you’re in need of a drain professional immediately, give us a call or schedule an appointment online and we’ll be there quickly to solve your problems – day or night. And there’s no charge for us to come out and assess the situation!